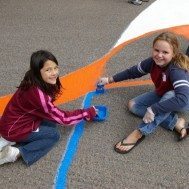 Picture the worst intersection you encounter on your commute to work. What would happen if the traffic lights were removed?

According to some experts, eliminating signals can actually encourage considerate driving.

The most extreme example comes from Poynton, U.K. The intersection running through the center of this historic 16,000-person village serves 26,000 vehicles per day, including a number of commercial trucks.

Back in 2011, traffic was tearing Poynton apart. Rush hour delays were lengthy and motorist frequently sped through green and yellow lights. Because pedestrians tended to get trapped in the middle of the four-lane highway, they avoided crossing it. Officials dubbed downtown a “traffic signal-controlled wasteland.”

City government, desperate to sew their quaint borough back together, sought help from Ben Hamilton-Baillie, a vanguard planner who’s first suggestion was to take away the traffic lights. Instead of a traditional ‘X’ shaped intersection, Hamilton-Baillie suggested two disc-shaped ’roundels’ where the streets overlapped. 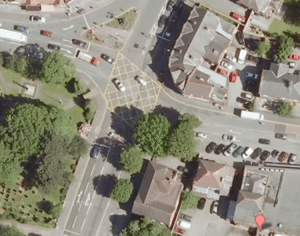 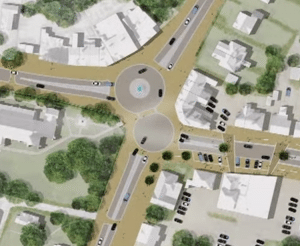 “I think it’s a nightmare, if I dare to be honest,” said Kaye Loutit, a resident of Poynton interviewed in this video. “Two roundels at a massively busy junction? People aren’t going to know what to do.”

Ten months and $6 million later, however, Poynton has been successfully “regenerated.” According to official monitoring, traffic now flows at the target speed of 16 to 17 mph (20 mph is the maximum ideal speed for pedestrian safety).  The streets have been narrowed into single lanes and walk space has doubled. People simply wave when they want to cross and no one waits at a traffic light.

These changes have been accomplished without reducing the official 30 mph speed limit.

What’s particularly striking, aside from the lack of traffic signals, is these roundels are completely flat. Even the sidewalks have been leveled. The curb-free surface is composed from varying colors of cobblestone: 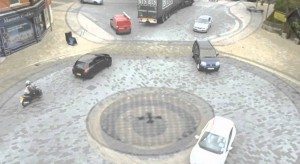 As motorists approach the roundels, they pass through tree-lined “gateways” displaying shiny metal “Poynton” signs. This announces the town ahead, beckoning drivers to slow down. The lack of signals at the intersection forces drivers to look around.

“People are aware of the ‘slow down, look, then go,'” Poynton resident, Carlo Benincasa, explains later in the video. “That’s what’s been implemented here and it’s working fantastically.”

How does paint create dramatic change?

This is the essence of ‘shared space’ or ‘second-generation traffic calming.’ Take away the instructions — the signs, lights, and solid yellow lines — and drivers rely on their own resources to judge what is and is not safe. In other words, they pay attention.

Radical as Poynton may seem, shared space is historically how streets functioned, particularly in urban centers where trolleys, pedestrians, street performers, and roadside merchants coexisted with personal vehicles. It wasn’t until the development of the Interstate Highway System and the resulting sprawl that we began to value traffic segregation and sought faster and faster cars.

Most of the developing world still travels in shared space and transportation experts are beginning to note the advantages. The Dutch concept of Woofner or “living yard,” where cyclists and pedestrians are prioritized, is fast becoming the prevailing wisdom for transportation in Holland and the Netherlands. The town of Makkinga hasn’t had traffic signs for over 10 years.

In the U.K. successful advocates like Ben Hamilton-Baillie and Martin Cassini (who made the Poynton video) have helped to demonstrate the success of such reform.  In the U.S., a congested stretch of Key West, Florida, improved after traffic signs were removed and streets were narrowed.

With or without signals, unexpected visuals — like the two-dimensional roundels — can play a major role in establishing shared space. Consider that a staggering number of accidents are caused by cognitive distraction — the interference that happens inside your head. Reorienting drivers to their physical environment is critical, especially in pedestrian-heavy zones, and traffic officials have been scrambling to figure out how do it. In Denmark they’ve taken this objective to an extreme, using public nudity to encourage the speed limit. 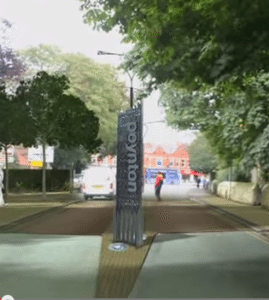 In the U.S. shared space is largely dismissed as too experimental. Even supporters are weary of mixing road users where the predominant culture prizes individual opportunities over communal awareness. If you can’t get people to drive 55, how can you trust them to negotiate complex routes?

Disability advocates, furthermore, question a safety strategy that relies on social cues claiming it threatens accessibility for the visually and hearing impaired. Cycling advocates argue that putting bikes and cars in the same space deters inexperienced cyclist. In fact, as the national advocacy group People for Bikes has demonstrated, ridership in U.S. cities tends to increase substantially when cyclists have segregated lanes.

It’s easy to see how ripping out street lights would be disastrous for the majority of U.S. roadways. But it might be useful for some, given the right context. Urban centers, for example, thrive on foot traffic but still want to provide some vehicle access. Likewise, family friendly neighborhoods worry about children’s safety but don’t want to keep kids locked in the house. These goals are only attainable once drivers acknowledge pedestrians have the right to be there.

It’s in these spaces where people are returning to the streets and demanding safer driving. An unofficial DIY movement to forge pedestrian-friendly space is creeping up throughout the country. Their instrument of choice? The visual power of public art. Here’s a handful of examples:

Taking their cues from City Repair in Portland, Oregon, Paint the Pavement (PtP) is a “place-making” effort that helps neighborhoods in St. Paul, Minnesota create on-street murals. These community projects are typically plotted at residential intersections. Since 2006, PtP has received Support from the Saint Paul neighborhood group, Hamline Midway Coalition and Hamline University.Although the group’s website doesn’t expressly target pedestrian safety, they do discuss the relationship between murals and responsible driving:

Folks who live at the painted intersections say that drivers are more observant and cautious, including themselves. A painted pavement, along with any other visual cues (toys, benches, bird feeders) on or along the road, let passers-by know that it is a lived-in neighborhood where folks know each other and might be outside chatting, playing, or gardening at any time — so they should drive carefully. 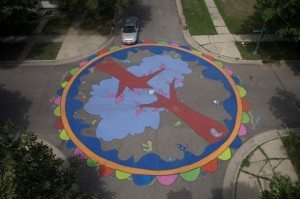 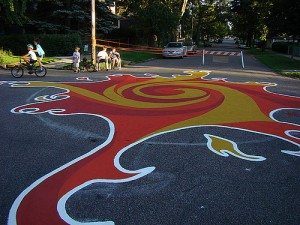 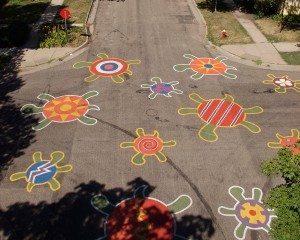 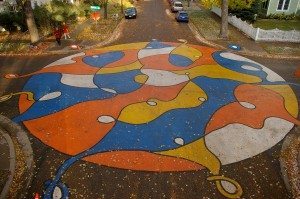 Once again, the state of Minnesota leads the charge in the streets-for-people movement. This time, Twin Cities residents are using flowers. The numerous Boulevards — the strip of dirt between the sidewalk and the street — are legally accessible to homeowners. What better place for a garden. As Merriam Park Neighbors for Peace explains in this instructional guide:

“Up front” gardening is becoming popular as people realize they can get great sun, more space, and the chance to share their gardens with the neighborhood. Boulevards, the area between the curb and the street, are a perfect spot for a garden. A vibrant garden can slow traffic, provide a spot to sit and visit, and is an ideal way to meet neighbors.

Better Blocks in Dallas, Texas, organizes “living charrettes” where communities gather to construct pop-up public spaces. One of their most effective tools has been crosswalks that are so bright and decorative, drivers can’t help but notice the pedestrian right of way. The crosswalk immediately below was constructed from strips of reclaimed automobile decal.

The international Park(ing) Day is an open-source project inviting artists, activists and everyday people to transform ordinary parking spaces into vibrant urban parks. The project originated in San Francisco in 2005 with the help of design firm, Rebar and continues spreading to new cities each year. Past Park(ing) days hosted political demonstrations, bicycle clinics, hoola-hoop contests, mini-golf, and even a wedding! Check out these examples from around the U.S. and beyond.

Dana Henry is a Content Strategist for Traffic Safety Store. After years working as a reporter and editor for print and online publications, Dana has developed her focus on emerging technology and innovation. She resides in Philadelphia and is an avid cyclist. View all posts by Dana Henry